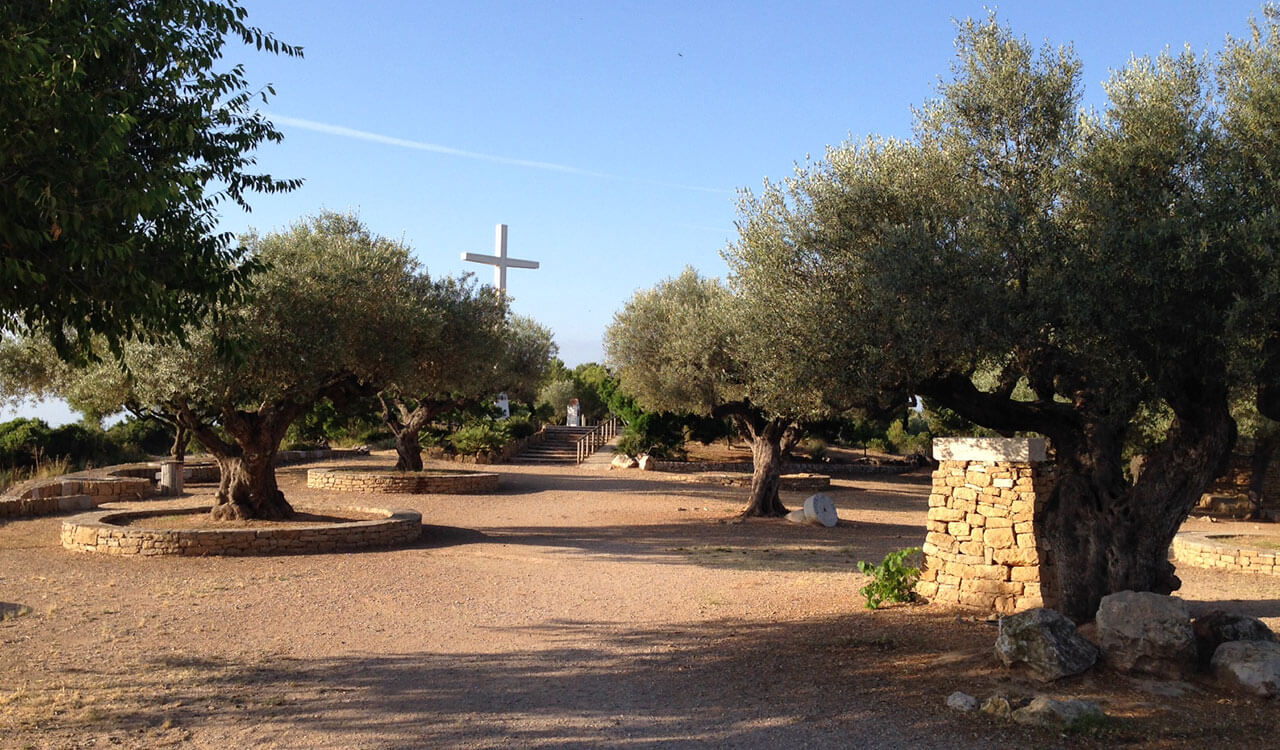 This trail is situated inside the Serra del Puig Nature Reserve, around the Santuari de la Misericòrdia, which is a place of great architectural, religious, and artistic value. From this point, you can enjoy splendid views of a large part of the territory surrounding Vinaròs and the Mediterranean Sea. A section of this trail is adapted for handicapped individuals.

This is divided into three sections:

The trail begins at the southeast corner of the sanctuary on a dirt trail that borders the Iberian settlement. This section descends to the east among wild almond and olive trees that have been invaded by pine trees, kermes oaks, juniper and so on. Continue descending from Montsià to Peníscola where you can take in a magnificent panoramic view of the plains. Approximately 100 m further below, we see the remains of Torreta dels Moros (Turret of the Moors), a medieval watchtower used to guard against pirate invasions. At this point, the path ascends the steepest slope in the entire route and about 70 m further ahead there are two pit caves that indicate the possible presence of subterranean caves. Once you pass this; walk 300 m upward and come to an Iberian settlement.

At the point where the Via Crucis (The Station of the Cross) and the Iberian settlement meet, the trail starts to descend until it crosses the road going to Vinaròs. On the other side, the trail continues among hundred-year-old olive trees and goes into the arboretum, a showcase for trees and bushes from the Mediterranean forest. There is an insectarium nearby where plants are used to feed butterfly caterpillars which are growing. Continue towards the northeast through an area densely populated by pine trees that serves as a rest area.

From here on, thickets such as rosemary, kermes and oak or rockrose are not very high, yet very dense. When you arrive at the Pan y Toros Bullring where you will turn to the north and ascend along a firebreak until reaching the trail again. Once back on the trail, turn west and you can see a Caseta de Volta (A traditional stone buildings), which is known as Caseta dels Sorrongos. We continue the assent and come across the remains of three ancient lime kilns. About 10 m ahead, there is a path next to repeater antennas. Here you will hook up with the GR-92

Continue along the firebreak. The trails go east and cross an area populated by young pine trees and newly planted oaks and holm oaks. A few metres ahead, you will find some exceptional holm oak trees. After crossing another firebreak, you will walk among young pine trees, common juniper, kermes oaks and rosemary plants. At the third firebreak, turn right and head south until you reach the boundary stones that indicate property borders. From here, there is an expansive view of the coast as well as of the Montsià mountain range. Continue along the marked trail to return to the sanctuary where this route started.